I honestly don’t know how I am finding time to sit down and write. Things have been so beautifully chaotic and I am finally getting a second to just chill out.

The past couple days have been insane. I am learning so much. But one thing that really stuck out to me was some of the things that Ryan Guldemond from the Vancouver based, indie-rock band Mother Mother said to us in our song writing workshop. He spoke about really opening yourself up to the possibility of inspiration hitting you at any moment. Don’t go and chase it. Truly listen to the world around you and don’t discount the sometimes mundane things from the creative process. Open yourself up to the opportunities that songs present you.

He showed us a voice memo that he took moments before our workshop of the sound of some ducks chatting with each other. Then he took the pitch that the quacks made and started writing a melody and boom he was sounding more beautiful than I ever could in my life. The duck song was born and I was feeling mystical and inspired.

Then he said “Who wants to come up, sing a song and we can pick it apart”. There was an awkward silence and then I volunteered without even realizing it. I played one of my most vulnerable songs that I had written a little while ago and I definitely cried in front of everyone. But it felt so freeing. I finally just let it all out. Ryan was so kind to me and gave such amazing feedback as to how I can make the sound better. I am really grateful for that moment.

Can’t wait for a song to appear. I’ll keep ya posted on the rest of the week! 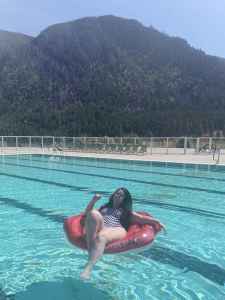