June 12, Calgary, AB: Today at 4:00pm MDT, WILD 953 and Alberta Music are pleased to announce both on air and from the stage at Calgary’s Palomino Smokehouse & Grill, this year’s Top 12 Artists for Project WILD. A professional development program designed to educate, promote, develop and launch the careers of some of Alberta’s up and coming country and roots artists, the Top 12 announcement live from the Palomino kicks off the Project’s third year, and first as Project WILD. Last year’s PEAK Performance Project finalists The Royal Foundry, will help ring in this year’s project, taking the stage at The Palomino immediately following the public announcement.

The 2016 Project WILD Top 12 artists, in no particular order, include:

Each of the Top 12 Artists will make their debut with Project WILD on Sunday, July 3rd, completing orientation and then performing for the public to get their first live listen in a series of showcase events running through to the November 2016 finale. For more information on this show, check out ProjectWILDcountry.com.

Administered by Alberta Music, sponsored by New Amsterdam Vodka and funded through WILD 953 – Calgary’s New Country, Project WILD, is part of a seven year, $4.9 million program, designed to kick-start the international music careers of 3 emerging Alberta country artists annually, and give a boost to all finalists selected by industry jury from hundreds of applicants. The Top 12 artists will be awarded a $5,000 Development award and will all get to participate in an intense and career changing music and music industry bootcamp, where they will be pushed to the very limit of what they can achieve as artists. Project WILD also provides public engagement through concerts and showcases, online content and fan voting.

This is the first year the program will be called Project WILD. For the previous two years in Alberta the program was known as the PEAK Performance Project, which also ran as a program in BC for the past seven years. Previous Alberta winners have been The Wet Secrets and Leeroy Stagger, while over seven years British Columbia saw Good For Grapes, Bed Of Stars, We Are the City, Kyprios, Current Swell, Dear Rouge and Rykka take home the top prize. Project WILD will run in Alberta for the next five years. 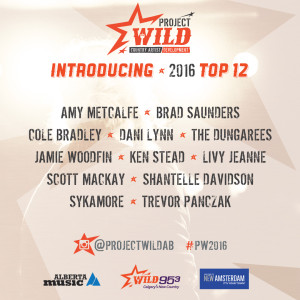