We’ve gotta teach her how to flirt…

First of all… the food here has beyond impressed me. Big ol’ glorious spread of food at every single meal. But maybe I shouldn’t have had so many taco’s last night before the big hockey game WHICH WAS RIGGED BY THE WAY. When the ref is also a member of the opposing team… there’s something fishy *cough cough* James…
The early mornings aren’t bugging me in the slightest. Even if I was the last one to go to bed. I couldn’t pass up the opportunity to get some work done while listening to the musical delights of Ryan Langois.

One worry that I had going into Project Wild Bootcamp was that the female dorm bathroom would be a nightmare due to how many curling irons we have and the lack of electrical outlets. But LADIES WE ARE DOING SO GOOD! We have learned how to stagger simple things like shower time, mirror time and snooze button time.

I don’t think I could’ve picked a better group of girls to be in this program with me. Everyone’s personalities are meshing perfectly and there’s zero bad vibes. And the dudes are just so chill.

I’ve learned so much today and the day isn’t even close to being over. I’ve gotta say that Tamara Beatty is a wizard. She knows how to communicate her advice to each individual person in a way that it clicks perfect and then BOOM you see a brand new artist in front of you in the matter of minutes.

I did something brave today. I was Tamara’s guinea pig during our class. I sang a part from my new single coming out and we worked on stage performance. In real-life I am so painfully awkward that flirting is impossible. But she told me I needed to flirt with my eyes. So I decided to clock eyes with the ever so sexy Shaela Miller and try to seduce her. Don’t know if it was successful but I am thankful that she was a good sport. This place is so flippin fun.

I’m having a bit of a lame emotional moment while writing this. Like, I am seriously welling up like a complete dork because I am so blown away by this whole experience. I feel so blessed to be in a supportive environment of likeminded people who are understanding of the fact that we are all hear being reborn into new versions of ourselves. I am humbled to be surrounded by so much talent and it inspires me. I am eternally grateful for every ounce of knowledge I am receiving from our mentors. Just wait for all the gushy sentimental crap I’ll be feeling on the last day… sheesh.

Everyone here is so rad. Thanks for picking good ones this year PW 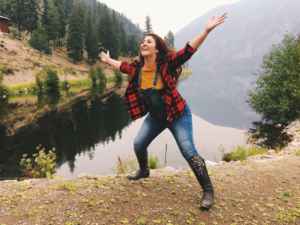