Walk to the old steel wheeler

I went for a walk today. As I walked, I allowed my mind to drift aimlessly and pondered any random thought that jumped into my brain – my brain that has been engaged and overloaded in the Project Wild Program. Here’s how that walk went.

It felt good to release myself to the gravel under my feet. I looked at the peaks surrounding Rock Ridge Canyon and thought about this incredible location nestled in the Similkameen Valley area of BC.  I wondered what that name would have meant for the people that first lived here. I wondered how unforgiving the winters may have been for those families from long ago that may have huddled close together and shared a fire while the winter wind howled outside their shelter.  I thought about those prairie winters on the farm. How feeding cows during the winter storms turned your face to leather and froze your breath into the zipper on the hood of my Carhardt jacket. Made you tough.  But how tough were the folks that lived here in the mountains a century or more ago.

It was hot today. The afternoon sun shone directly down on my old Wrangler hat and I was glad I was wearing it. I followed the simple gravel trail out past the parking lot where the artists vehicles were parked. I noticed the vehicles were as uniquely different as the artists that I have been sharing the classroom, studio, and stage with.  How absolutely reliant we are on our vehicles to get us from show to show.  I smiled and thought about the old saying ‘an artist has a $5000 guitar, a $500 car, and plays for 50 bucks’ – wow so true.

I walked down the windy road and up the hill toward the entrance of the Rock Ridge Canyon Resort.  I noticed some cattle handling facilities and wondered if any one runs their cows through the area.  My mind drifted back to when I owned cattle and I still farmed. I loved the peace you would feel deep down when you walked through the heard after feeding them in the spring – when the calves were young and stayed close to their mothers.  I thought about when I pastured lease land west of Water Valley for a few summers in the foothills of Alberta.  The cows would come home and chase a coyote right to the fence. Must have been a lot of cougars and maybe bears on the lease land.  I hate bears, actually I have a real fear of them.  I wondered if there were any bears out on the edge of the bush just out of my sight, maybe eyeing me up for a quick snack.  That would be a bad way to go.  I scrolled through my phone for the photo of the bear from the Copper Room where we recorded tracks yesterday. Kind of freaks me out even though its stuffed. 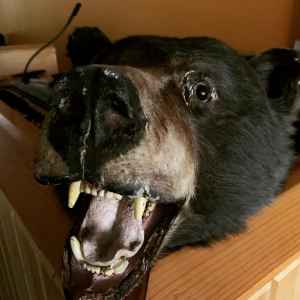 The air in my lungs felt good as I pushed on past the entrance of the Rock Ridge Canyon and further down the road. There were some weird weeds along the edge of the road – ones that we don’t have in Alberta. I thought about the range and vegetation courses I took while studying Agriculture at UofA.  I was thinking how the years have flown by since attending University and how I have remembered so little…but really have learned so much.  I’ve learned so much about myself, about life, and about what’s really important for my path forward.

And then I saw the old steel wheel seeder. 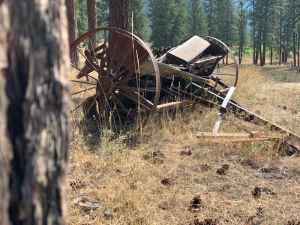 I came up over the rise and around the bend and there it was.  Rusted, broken, and beautiful. Timeless. It  really didn’t have a place here.  The ground is hard with virtually no topsoil. The summer heat and drought would be unforgiving for any seed planted by this machine.  But yet here this old seeder was. Someone had initially cleared the land, broke the soil and used this seeder to sow the grass that was growing in the fields and on the sides of Willies Ranch Road leading into Rock Ridge Canyon.  What was the story of this old seeder – who, where, when? It was timeless and it inspired me.

I thought of the speech that Ryan Guldemond of Mother Mother gave about finding inspiration, and I began to hum a few lines and the start of a new song – ‘A thousand yesterdays’.  As I walked back to the lodge I focused on the emotion that that old seeder made me feel – lonely, lost, forgotten. I jotted down a few more lines into my phone.  Interesting.

I thought about how a  friend once told me to make sure to write songs with weight, and beyond that of the current trend.  I held on to that thought for awhile as I continued home.

I want my songs to be like that old seeder – still around after I’m long gone.