Put Me In, Coach

Pictured: me, doing something much more my speed. Drinking a beer and waving my hands around.

The salty burn of sweat pouring into your eyes, the fight or flight response that kicks in when you realize that this, in fact, is what your body is meant to do; and the impending fear that you might keel over dead while trying to do it. That that horrific and euphoric shock is one of my favourite feelings, as of right now. That, or I’m delirious from the activity, it’s hard to tell.

For context – I’ve spent 3 months in a Dodge Grand Caravan with my bandmates travelling from Vancouver to Philadelphia and everywhere in between. Touring, performing, writing, working, burning rubber – these are my favourite things. However, the physical toll of our lifestyle hit me hard. With our most ambitious schedule yet, we barely had time for sleep or proper diet, let alone a stretch, shower or shave. These little sacrifices in personal care become heavy over time, literally and figuratively. I hit some serious mental-wellness walls, panic attacks pre-festival workshops, crying in the shuttles on the way back to the hotel, meltdowns post-show. I needed a break, I probably still do. Rolling myself out of the van, down the hill and into a team sport was alarming to the system, but in the best way possible.

More context – for my off weeks, which are becoming fewer and far between, I sit glued to a computer screen terrified by the idea of falling behind. I consistently blow off exercise, social engagements and cooking at home, making the excuse that I have “too much to do.” Man, when are we going to give ourselves a break? Entrepreneurs and artists have no concept of work hours or personal time because our job and identity is always “on”, and this idea of grinding and needing to be, produce and engage are, in my opinion, damaging the actual meat of what we need to do: incubate and exist. Sounds idealistic and a little trite, and it might be, but how can we mirror the world around us if we are too concerned with creating our own world for people to look at?

So, as I’m gagging on the foam of beers past and staggering up and down the concrete, trying to jog muscle memory of my former hockey skills, I’m thinking to myself: why in the forest-nymph-dink don’t I make more time for this? (*I’m not allowed to swear in the blog, so yeah, enjoy these little curse-creations.)

As I think on it more and more, the team aspect also lends itself well to this positive kick I’m apparently riding out at the moment. As artists we are so constantly conditioned to isolate ourselves and feel like the world is against us. We keep other artists at bay worrying that they have more or better, fearing that irrelevancy and financial impracticality will sink us below the curve. But tonight, sharing a common goal, and fighting for bragging rights against industry (who won because they are awful cheaters they threw sand in my eyes it was CRAZY) was insanely empowering. We need more of that, I need more of that.

Exercise and teamwork, holy Christmas. I guess that’s what I’m on about. Took me a while to get there but we made it, folks. Pour yourself a drink if you’ve read this far, you’ve earned it.

This is uncharacteristically jovial for me, so I’m gonna leave it here. Shotgun beers, f*** fascism and sticks on the ice, kids. 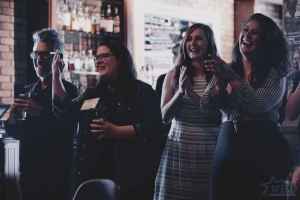