WILD 953 and Alberta Music are pleased to announce this year’s Top 12 Artists for Project WILD. A professional development program designed to educate, promote, develop and launch the careers of some of Alberta’s up and coming country and roots artists, the Top 12 announcement kicks off the Project’s second year.
The 2017 Project WILD Top 12 artists, in alphabetical order, are:

Each of the Top 12 Artists will make their debut with Project WILD at Knoxvilles on Sunday, June 25th, completing orientation and then performing for the public to get their first live listen, in a series of showcase events running through to the November 2017 finale. For more information on this show, check out ProjectWILDcountry.com.

This is the second year for Project WILD, last year’s inaugural winners were The Dungarees (1st place), Sykamore (2nd place), and Ken Stead (3rd place). For the two years prior to the last, the program was known as the PEAK Performance Project, which also ran as a program in BC for seven years. Project WILD will run in Alberta for the next three years.

Project WILD is designed to develop and launch the careers of some of Alberta up and coming artists. It also hopes to foster the Alberta music industry and create a sense of community amongst artists and music professionals. Top Prizes this year for the Alberta Project include a $100,953 top prize, $75,000 second prize, $50,000 third prize, as well as a $5,000 Development award given to each Top 12 band to help them with their career development. 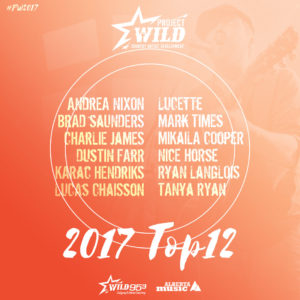