It’s Tuesday. On day one, everybody was down in the lodge ready for breakfast by 8:00 – if not before. Today there were about 6 people there at 8:00. I think the lack of sleep is starting to get to some people but its all worth it. We were in the studio last night working until 2:00. Every corner you turn there’s someone working on some sort of project.

I walked by Devin, Blake and Ryan sitting around just chatting about life and then I came back by about 2 hours later and they were playing a song they had just written based around a title that fell naturally out of their conversation. It sounds amazing.

I was walking up to my dorm and Julia is rehearsing for her showcase. She sounds like a mixture of Amanda Wilkinson, Dolly Parton, and Leanne Womack. Her showcase was deadly.

I decided to take the zipline and just before we are about to slide someone comes on the radio saying to hold off for 3 minutes while they record a live acoustic video on the deck below. So cool.

Our producer Emily wants to take advantage of the natural reverberation of the canyon so she is working on a plan to blast a guitar amp out across the lake and capture it on mics placed on the other side of the lake at the beach… WHAT?! SO COOL.

This place is a pressure cooker for creativity. It’s intense, it’s hot, and you might lose some sleep – but I’ll be damned if every single person here isn’t cooking up some kind of delicious musical treat. 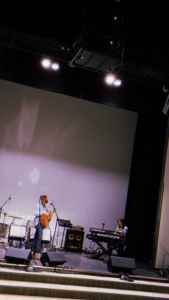