Today has been ABSOLUTELY INSPIRING.

Mike Plume, Mike Plume, Mike Plume…I can not say enough about this man.  Mike has given me so much motivation to write.  New ways to write, better ways to write and new ways to be inspired.  Mike did his entire session in the most poetic and honest way.  He had everyone in the room in tears.  Bringing all of this industry information right back down to the very core of why we are doing what we are doing.  The picture I posted is just a small amount of nuggets i took from it. 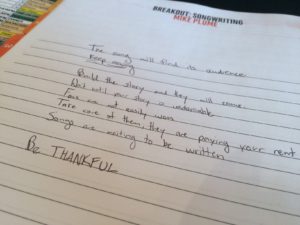