Day 5 is in the books and the killer week continues!  Where to even start…..

The day started with some invaluable coaching from Social Media Swami Glen Erickson, and Publicist Aimee Hill. The devil is in the details, as they say, and Glen and Aimee did an outstanding job laying it all out for us.  There’s so much to learn, know, remember and put into practice with how we deliver ourselves to the public.  Project Wild has been pretty thorough in providing that help.  Full marks!!

The afternoon had us working with Warner’s Scott Johnson, and what we expected to be a fairly straight forward session turned out to be a pretty hard hitting, reflective and emotional experience.  Scott had us illustrate (literally) who we are as as band, and what we stand for.  His question to us was whether that answer comes across in how we deliver ourselves, and our brand.  The introspection and reflection was pretty moving.  I can say that the experience only further galvanized who the 5 of us are.  We’re 1.  And it feels great.

The afternoon was a quick soundcheck, a nap, some swimming and then preparing for our showcase.  Normally, nerves aren’t a pre-show issue.  Last night was a huge exception.  And only further exacerbated by amazing sets by Sykamore, Domino and Ken Stead.  Great performances should be motivating; encouraging.  Those 3 nailed it so solidly that the idea of packing up and heading home seemed to make good sense.  In the end, staying was the wise choice; things went well for us and we were very happy with how we played.  The judges were good to us, save for performance coach Tamara Beatty having some fun with one of us in front of the entire camp.  It was all in good fun…

The absolute high light for us was being asked to back-up song smith Mike Plume in the closing set of the night. Plume, a legendary road warrior in our circle, has long been a mentor, supporter and friend of the band.  As one of the finest songwriters our country has seen, sharing the stage with Mike was a great honour.  Much like being a part of this project. 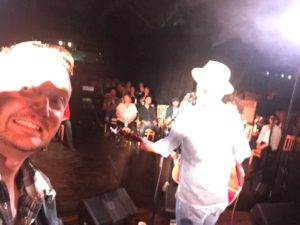