Well, it’s Day 2 at Project Wild and with all that we have done, it feels like we’ve already been here for a week!  Despite the smoke, the setting is beautiful for songwriting, bonding with our fellow artists and, of course…hockey games…but we’ll get to that later.

Bryton and I arrived after a long drive with our fellow artist, co-writer, and friend Mariya.  It was all worth it to see this stunning piece of paradise in Princeton, BC!  (I don’t have any photos because I took them all on Bryton’s phone…#sarrynotsarry)  Anyway, immediately, we reconnected with the other artists in PW and enjoyed some of the best “camp” food I’ve ever had for lunch.

One of our challenges for PW is co-writing a song with a fellow Top 12 PW artist based on a theme that has been chosen.  Then, we are expected record the song with a producer that we were paired with before arriving at camp.  Our co-writer is Jeremy Grey, and the theme for the song is “There’s A Place”.  After lunch, we put the finishing touches on the song so that when our producer, Brad Simons arrived, we would be ready to go!  We will spend the week working with Brad and the house band to make our vision come to life.  We couldn’t be more excited!

After dinner, the big event of the night was the faculty vs. artist hockey game.  I can’t tell you how terrible I am at hockey, but I had a great time being the “hockey mom” cheering on the sidelines!  I also played a solid 3 minutes and felt like I made a worth contribution – if not with my athleticism, with my enthusiasm for the game.  Unfortunately, the faculty won (6-5…so close!) but everyone had a great time. 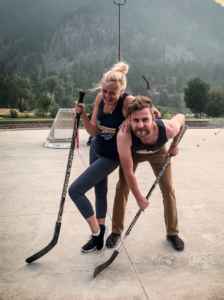 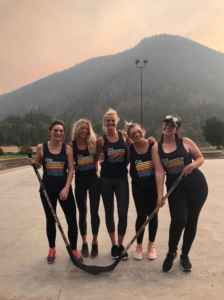 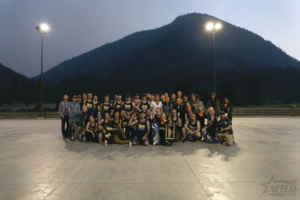 Finally, at around 11:30 PM, Bryton and I had the opportunity to record a live off the floor video of an acoustic song.  We chose to perform an original song, “Blame It On The Neon” which is still our favourite song of ours to sing!  We can’t wait to see what the video looks like after the videographers have edited it.  Stay tuned! 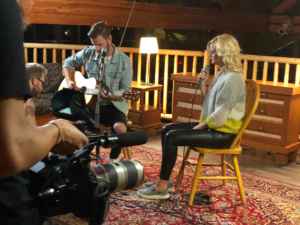 Today, we have been in lots of workshops – mostly spending time with Ben Nixon: sound technician and overall genius as well as Tamara Beatty: performance and vocal health specialist!  We have been soaking up every  minute and learning so much.  We are very thankful for the chance to get such quality time with these experts!  We are also thankful that we get to do it alongside such wonderful artists!