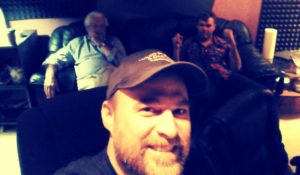 You’ll find Scott Franchuk’s name on the back of records by Corb Lund, Romi Mayes, Shuyler Jansen, Del Barber, Michael Rault, Colleen Brown, Nature Of, Scenic Route to Alaska, the Mcdades and about a hundred others. You’ll also hear his live concert recordings of artists like John Prine, kd Lang, Ramblin’ Jack Elliot and dozens more being aired nationally on CBC and CKUA. Scott has toured throughout Canada, the US and the UK as a FOH mixer in venues of all sizes from small clubs to arenas and the mainstage of Glastonbury. Scott’s work has been nominated for a Juno Award , a Polaris Prize, and has won multiple Western Canadian Music Awards and Edmonton Music Awards. Scott is a 20 year veteran recording engineer, mastering engineer, producer and owner of the legendary Edmonton studio, Riverdale Recorders.