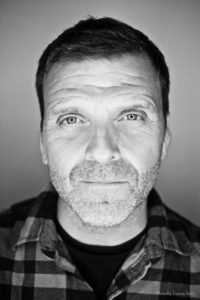 I was born at a very young age in Moncton, New Brunswick in the year of the White Album (1968). I moved to Alberta in 1985. I hit the road in 1987 in my first of many cover bands, all of which suffered dreadfully due in large part to the fact that they’d hired a lead singer (me) who, by all accounts, couldn’t sing. In November 1993, I released my first album “Songs From A Northern Town”. From then until now I’ve released 11 albums. I even sang a song at Stompin’ Tom’s funeral. Along the way, I learned what makes a song tick. There is nothing I enjoy more than writing songs. I love the craft of writing songs.

I love that they come out of the air. One minute, there’s nothing there. The next, you’re on to a new song. Amazing. I’m fascinated by the process.