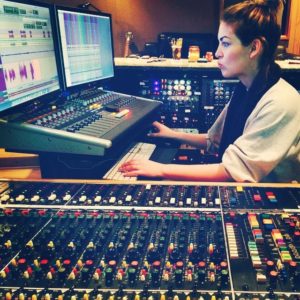 Although only 27, over the past ten years Carly McKillip has built an impressive resume in the entertain- ment industry that reflects her creative scope, talent, drive and accolades. Known as an Actress (multiple roles in movies and series including Alice McLeod in CTV’s “Alice I Think”); Songwriter (dozens of co- writes with award-winning writers such as Nathan Chapman (Taylor Swift), Sarah Buxton (Keith Urban), Jeff Trott (Sheryl Crowe), Richard Marx and Linda Perry; Musician (multiple B.C.C.M.A. winner for “Key- board Player of the Year” & three-time nominee of the corresponding C.C.M.A. award), Artist (one-half of the multi-award winning Canadian country duo One More Girl); Vocal Editor (Small Town Pistols, The Fray) – Carly is now adding Producer to the many hats she wears with ease.

Having grown up in a music industry family (dad Tom is an award-winning producer himself ), there
has been an increasing demand for Carly’s production expertise. With her background and experience as an artist, songwriter and musician, Carly brings great added-value to the production process, not to mention superb creative vision. In addition, she has recently been teaming up with CCMA ‘Guitar Player of the Year’ /producer (and husband) Darren Savard – pooling their formidable talents is proving to be a winning recipe.

In the past year alone, Carly has garnered production credits on west coast darling Ray Gibson’s debut al- bum and critically acclaimed MDM artist David James’ debut and sophomore outings. In addition, Carly’s production work can be heard on recently released Warner Music Canada artist Meghan Patrick’s debut album – alongside tracks produced by Vince Gill and Chad Kroeger – for which she has received a 2016 nomination for CCMA ‘Producer of the Year’.