Introducing some of the Project WILD Bootcamp faculty – the women and men we found who are the best at what they do, handpicked and brought to you, to coach, teach, and develop. Get to know them, connect with them via social media, and get prepared.

What Clayton brings to Project WILD:  Clayton Bellamy has had enormous success with his band The Road Hammers, as well as a solo performer. He has remained an incredibly accessible star of the Canadian country music industry, down to earth and willing to tell a great story. His accessibility to our Top 12 to share his stories and experience is irreplaceable.

Co-producing “Five Crow Silver” with veteran producer/writer/mixer Scott Baggett (Alison Krauss, John Waite, The Road Hammers, Billy Joe Shaver and a list of dozens), Bellamy has crafted a fully realized suite of songs that draw from all musical genres. There’s the Stones/Faces swagger of “You Could Be Mine”, the Celtic rock stomp of The Pogues-ish “Victim Of My Own Compromise” and the Neil Young and Crazy Horse white knuckle ride through “End Of My Rope”. The first single “Goodbye America” takes an honest inside look at the American dream on a track that could easily be on any Clash album.

But it’s not just about wearing your influences on your sleeve. Bellamy has taken all of these musical touchpoint’s and melded them into his own cohesive musical vision. Long known for his athletic marathon live shows, Clayton now has the recorded proof to back up the opening statement in the first paragraph. He’s standing tall for his beliefs and after one listen to “Five Crow Silver” you’ll be a true believer too. Guaranteed. 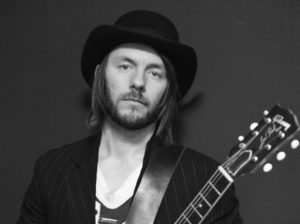