Where do I start! Project wild boot camp has been absolutely incredible already, When we arrived I was blown away by the scenery. The facility is laid out perfectly for this program. We drove several miles into the secluded back country. The camp is situated right on the lake with an amazing view of surrounding mountains. Leading up to the camp we were assigned a partner to write a song with. On day One  we met with our producers. Our producer is Carly Mckillip. During boot camp we will be recording 2 songs with our producer. One original and one cover and at the end of boot camp we have a listening party with an award for best song. As the sun went down over the mountains we squared off for a good o’l game of ball hockey. It was the artists against the facility. The game was a close one with the facility scoring in over. They held the trophy high as they celebrated. But!!! In the darkness of night the trophy mysteriously went missing. Word in the camp has it that they now want a rematch. 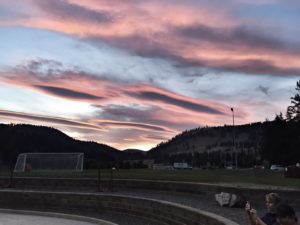