And things are only getting started!

The fast and slow paced winding roads leading up to Rockridge canyon mirrored how my brain and emotions were acting on day one of PW Bootcamp. Being beyond ecstatic to see everyone and really get to know all of the other artists on a real level, I honestly had no idea what to expect out of the next 6 days. One thing that was evident in the first few hours of arriving at camp was the detail and time the awesome Alberta Team put into taking care of the 20 of us, it was definitely appreciated!

Sitting here reflecting on the last week, I’m finding it hard to write this final blog. There are just so many things I want to speak to and trying to get how I’m feeling onto paper is proving more difficult than I originally thought it would.  First and foremost, this week has definitely changed my perspective on what it means to be an entrepreneur. Being brought up in the music industry studying and researching the business side of things has been helpful but I can honestly say this week has impacted me in a way that has helped me to see all the little things that I should already be paying attention to. My favourite part of the week was definitely a mixture between attending the classes and getting to know everyone on such a personal level! Our classes were chock-full of such useful information and it was amazing how willing each of the mentors were to take and answer all the questions we had. My top 4 favourite classes were Digital Strategy with Vanessa Cito, Radio MD’s with Mark Patrick & Jonny B, Grants & Marketing Plans with Laurie Brown, and Vocal Performance with Tamara Beatty! I learned sooooo much from each and every one of these classes, especially from Vannessa and Laurie. Vanessa was absolutely hilarious and just a straight up genius in her line of work. Definitely learned a lot when it comes to analytics and how to organize everything like that. Same goes for Laurie, along with talking about the best ways to be the most qualified for grants, she also showed us examples of EPK’s and grant applications her and Don Amero wrote which was super insightful!

As for my second fav part of camp, getting to hang out and really start to get to know everyone was just super incredible. There were quite a few times when I heard the words “this doesn’t even feel like a competition” either coming from me or the other artists. And it’s very true, this competition is set up in a way that is mainly about making connections and relationships! Just by becoming top 12, each of us has already won such an amazing prize. It may sound cheesy but just having the opportunities we’re given being the #WildDozen is absolutely surreal! Since getting home, I’ve already started putting so many strategies I learnt at camp into place, like creating Excel sheets for expenses and using some of the social media marketing apps we were shown by Vanessa! Working in the studio with Matty, Matt and the Nimbits was another super amazing opportunity to see how other producers work. Performing and recording with Matty was super special, he’s definitely been someone I’ve looked up at for quite a few years and working with him on that level was really cool!

I had so many amazing experiences with the other artists at camp, whether it was songwriting, hanging out at meals, talking in our bunks or just doing any kind of activities, there was also a moment & a memory to be made. One that specifically sticks out to me was one night early in the week Josh and I were hanging out in the gazebo writing and talking when Mariya came and joined us! Sitting down she asked Josh about what he is doing in the music industry and where he wants to go whether it be continuing to freelance, or write or start a solo career and we also had some amazing big sister life advice chats that I really needed at the moment. We sat there and played music, wrote and talked for at least two hours and I remember seeing a huge harvest yellow moon start to peek out from behind one of the mountains and I just thought I myself how truly lucky I was to be right there in that exact moment.

The last full day of camp was odd, I had a feeling of conclusion but also felt a burning inside me that things are only getting started! Being chosen for Project Wild Top 12 at just 19 years old has really given me the chance to sit down and take a good hard look at my career, how far I’ve come, where I am now and where I am going. Being given the opportunity and help to look at these things in detail, especially at such a young age in my career, has already and will continue to benefit me greatly as a move through the rest of the competition as well as after! Thanks so much to every single person either at camp or who had a hand in Project Wild in any sense. You’re helping make dreams come true!

This changed our lives. My experience at Rockridge was beyond incredible when Olivia and I first pulled up to the camp I was immediately excited. Not to mention the fact that I knew we were gonna be able to get out and sports before kicking our adventure together. Of course, the classes and mentors we were lucky enough to attend were incredible, but my favourite part about camp was the people. Playing with Matty and the guys on stage, co-writing for the first time and one of my coolest memories being – On the 4th night, Jamie was in studio tracking vocals and Matty popped off his headphones, nudged me and asked something along the lines of “do you want to learn how to do this kind of stuff” and began to give me a quick run-through of his recording equipment! It was just really cool to have the opportunity to learn from such a professional that I continue to look up to.

A conversation spiked up between me and Mark Rogers about how he just moved down to Nashville and how I’m heading down there on the 31st, so know we are going to meet up for coffee and potentially talk about setting up Skype lessons on theory! He has also never taught anyone before so he was excited to kind of use me as a guinea pig to test out that type of experience.

Meeting and spending time with everyone was seriously the highlight though, as this program continues it’s been really cool to make connections in the music industry in Alberta and getting to hang out with everyone on a super chilled and personal level was a cool experience overall. Driving out of Rockridge, we tossed Shaela’s CD (write she signed for me) and listened to all the tracks, I think it reflects the friendships that were made here and how it’s such a positive change for everyone! 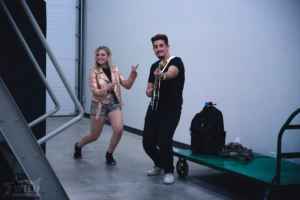