We started to record the song we wrote with Midnight Lights today. The song is called Set Me Free, but originally it was called Sweet Sweet Place featuring Without You. To be honest, only Mike ever called it that. The bed tracks were laid down with the world class incredible house band featuring Mike.  Notice how I separated Mike and world class incredible.  We kid we kid.  That’s one of the best parts about being in a band though; that constant joking around and poking fun at each other.

The song is a romp, stomping revival break up song and we CANNOT wait for you to hear. The vocal duet with Mat and Katie is so awesome and having Jason, Doc and Mike add the back up choir just bumps up how much fun it is .

Right after lunch the band decided to head to the top of the hill with Mr Steve Derpak for a thrill ride. Steve filled in on the zip line for Doc. To be honest, Steve zip lines so much better than Doc anyways.  It’s unfortunate, but we may end up having to have the uncomfortable conversation with Doc to let him know that his zip line duties are going to be permanently filled by Steve. I think Jeff will have to be the one who breaks the bad news to him.  The zip line here goes right over the lodge and across the lake. Stunning views and an adrenaline rush, who could ask for more? 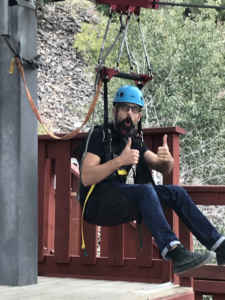