KATIE: I grew up on Country music. That was what was played in our house most of the time, and the radio station was always tuned to the country station. I guess it kind of goes with the territory when you grow up on a farm. I was also in 4-H so at every party we were two-stepping the night away!

BRANDI: …and I grew up the exact same way! One of my fondest memories growing up was driving into town with Mom and Grandma in the front seat, singing harmonies to every tune on the country radio station. Listening to those songs, and to my mom and grandma harmonizing along was how I learned to sing.

KRISTA: Nice Horse actually started on a writing trip to Hawaii. We’d all been artists and writers in different projects before, but that was the first time the four of us had ever written together. Although we’ve all been friends for a long time, I don’t think we could have ever predicted how well we’d hit it off as co-writers – we ended up writing over 25 songs in just four days!

KATIE: I think we’d all agree on Dolly Parton! I’d also LOVE to do a tour with the guys in Midland. I’ve watched a bunch of their videos and they just seem like fun guys.

BRANDI: What about Shania? I can’t think of anything better than opening for such a Canadian country icon as she is making her big return to the country music scene! I would also be overjoyed to open for Old Dominion – I love their vibe as a band, and feel like they are Nice Horse’s kindred spirits. They’re all about being friends and doing this whole crazy music thing together as a team, which is exactly like us!

KALEY: Well, we had so much fun opening for Tom Cochrane this past year that I would just love to open for him again. I miss Tom and Red Rider so much already!

KRISTA: Personally, I love how country is starting to borrow more and more from pop – there’s some really cool music being created right now. Sam Hunt, Florida Georgia Line… even Keith Urban is getting in on it! I grew up on indie music and 80s pop, so I definitely have a soft spot in my heart for a good synth patch.

KATIE: And I’m the total opposite. I’m loving the country that is going back to the more traditional, old school style. 80s/90s country is forever in my heart!

KALEY: I am more in Camp Katie for this one….but don’t worry Krista, I think Brandi would be with you!

BRANDI: The people! The chance to work with such expert mentors and staff at the boot camp, and to do it alongside our peers in the Alberta country music community is really going to be such an unforgettable experience. Nice Horse is a pretty new band, and the opportunity to become friends with eleven other incredible artists is something that we feel very grateful to do so early in our career. Even after spending just one day with everyone at the orientation, we have already fallen in love with all of these wonderful people! It’s going to be one Wild summer… 😉

KALEY: Yeah, what she said! 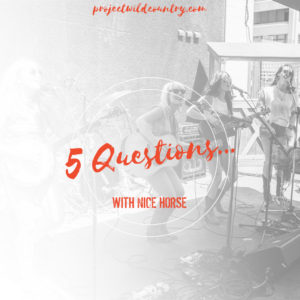