I grew up listening to Country music, my mom has videos of me dancing to Shania Twain “whose bed have your boots been under” in my diaper. Before I took to creating music I was in love with writing which translated into a plethora of poems and songs, luckily my mom had me in piano lessons from a young age so I would spend the majority of my practice sessions putting music to my own writings. I later taught myself how to play a bit of guitar so I could bring it anywhere with me to sing and write. I strayed to Pop, Hip Hop and R&B during my teens but it didn’t take long to realize that no matter what I would write or sing it kept coming back to the same foundation and soundd which is Country. I am a 4th generation Albertan raised in a Rodeo and Farming Family I don’t ever remember making a clear choice to be “Country” it was what came naturally to me, where I felt the most at home, in ways I feel like it chose me.

I wrote my first song when I was around 8 years old if a had to take a good guess and it was about a bird I had rescued in our backyard. The only reason I know this is because I found the song in a an old journal from Claire’s and my letters are all slanted and different sizes!

I wrote all of my songs on my own when I first started to identify as an artist, To this day I have only written one or two songs with other people. I’m looking forward to the co-writing challenge and meeting some writing partners during the PW Boot camp!

If I could go on tour with Miranda Lambert that would be the ultimate dream for me. Not only has she influenced my music but she has also influenced me as a young women. Miranda advocates for female artists and when it comes to chicks in the music industry your either one of us or none of us. If I could watch and learn from her on a tour I think it would be invaluable information and experience, not to mention I think we could write some absolute banger’s!

I’m not sure if it’s so much a trend but the relate-ability of country music is bar none, It remains consistent through the genre over decades. People turn to music to feel, escape and to know they’re not the only ones feeling that way, the honesty that is going into country music right now hits home. For example “Time” by Dean Brody not only is relate-able but it is brutally honest and delivers such a clear message I’m emotional every time I hear it. 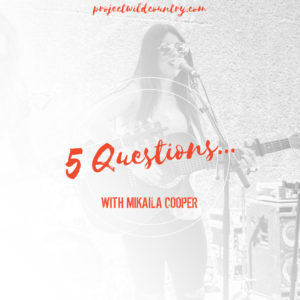