I grew up listening to my parents’ record collection so a lot of my first musical memories are of listening to LPs from the 70s and 80s–lots of the Eagles, Jackson Browne, Bob Seger, James Taylor, Neil Young and Bruce Springsteen. I also have to credit my parents for taking me to a Corb Lund concert right around the time I was learning to play guitar. That show really left an impact on me. Elliot Brood opened (they were billed as a “death-country” band which I thought was the coolest and weirdest thing I’d ever heard) and Corb was touring his Hair In My Eyes Like a Highland Steer album. I don’t think I took my eyes off the stage the whole time. That album is still one of my all time favourites and really set me off in pursuit of the kind of folk-country that I love today.

The first song I remember writing was about a priest who picks up a hitchhiker who happens to be a murderer. I was probably twelve years old. Kind of weird. I can’t remember now how the story ended but I remember that was the premise. It was around age fifteen that I started gigging with an indie-rock band and writing songs that we would eventually record.

I think its a great time to be a country artist, mainly because there is no trend that is dominating. Everyone is pushing the boundaries in different directions. Whether that means people like Sam Hunt and Marren Morris pushing the boundary between pop/R&B and country, or artists like Midland, Sturgil Simpson, and Chris Stapleton bringing back traditional sounds in an original form, there are a ton of artists trying new things and it is always interesting to hear what is coming next.

I’ve heard that boot camp is heaps of fun as well as a an amazing learning experience, so I’m probably most excited for that. I’m also excited to work what we learn from camp into the live show for the showcase in October. 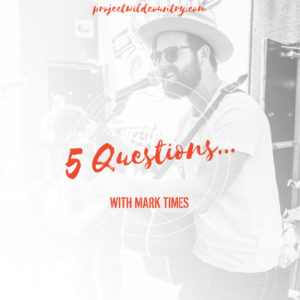