I grew up listening to my parents music collection and fell in love with country songwriters like Guy Clark and Townes Van Zandt and Emmylou Harris. In Kindergarten I brought my Dad and our guitars one week for show and tell and we played “Drunken Angel” by Lucinda Williams. In hindsight it may have been a little inappropriate for the class, but it was certainly a step up from the music my classmates were fans of at that age.

I wrote my first song when I was busking as a kid. It was a slow day and I just started to play around with this riff and a few hours later I had written a song called “California Boulevard.” I honestly can’t remember a word of it today, but at the time I was pretty proud of it.

There are so many good answers to this question. If I had to pick one artist right now, I’d probably choose Jason Isbell. He just put a new record out so maybe it’s not too late!

I’m the resurgence of roots music in the mainstream country world. Artists like Kacey Musgraves, Chris Stapleton and Sturgill Simpson are making records that pay homage to the “golden era” of country music. I’d love to see even more of that Merle/Willie/Dolly ect. inspired music showcased on radio and up for major awards.

I’m most looking forward to the seminars at the Project WILD Boot Camp. To me Boot Camp sounds like a crash course in the music industry, which is exactly what I need. I’ve spent most of my career to this point working on my songwriting and musicianship, and payed little attention to the business aspect. The guest speakers that Project WILD bring in are world class and can provide me the tools to start making strides in the right direction. 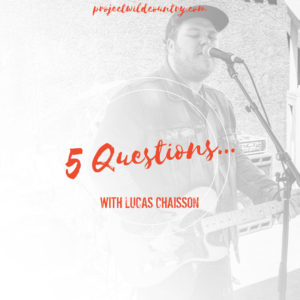