At the risk of sounding trite, I believe country music chose me. My influences are as wide-ranging as anyone and I have tried to move away from country as a performer but to no avail. I have learned to simply embrace who I am and pivot toward my other influences FROM country as my center.

In my early teens, just me and my guitar. I did some co-writing with a friend from back home in high school as well.

I believe that the best trend in country music right now is also the thing that most purists despise: the continued influence of other genres like Electronic Dance Music and Hip-Hop. Chet Atkins faced serious backlash from fans of “hillbilly” music when he turned Patsy Cline and Jim Reeves into “cosmopolitan country” acts, but now they are highly revered as “country music legends.”

I am most looking forward to working with and learning from the more roots-leaning artists in Project WILD. So many of my musical influences come from contemporary folk and roots rock, but my vision is to always draw from these influences while leaning wholly into modern country. 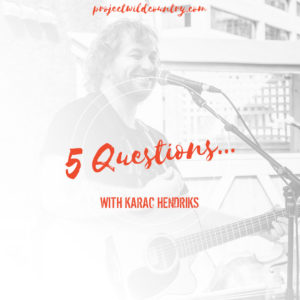