If Kacey Musgraves and Meghan Trainor had a country-soul love-child, the result would be Mariya Stokes. With the release of her debut
single, "Hands on My Body" in February 2019, Stokes introduced herself with a simple, sexy anthem that blurs the lines between country
and pop with edgy lyrics and an R&B inspired groove. Produced by 2018 CCMA "Producer of the Year" Nominees, Spencer Cheyne and
Justin Kudding, the song reached #10 on the iTunes Canadian Country Chart, was streamed over 50,000 times on Spotify in the first
month of its release, and was added to Spotify’s Next of Nashville and Down Home Country playlists and Stingray’s Pop Adult Streaming
Channel.

Growing up in Stavely Alberta, Stokes was raised in her parents' small-town bar, and at eight years old was sneaking in on Friday
afternoons to sing with the local jam band. She has been pursuing music ever since; the past year of her career was packed full of
shows including opening for multiple-JUNO award winner, Jann Arden at the Palace Theatre in Calgary and playing stages such as
Rodgers Hometown Hockey Lethbridge, Country Thunder Alberta, and the Coca-Cola Stage at Calgary Stampede. She was also a 2018
top-12 Project WILD finisher, which is a country focused artist development program run by Alberta Music and WILD 95.3 (Calgary).
Stokes is committed to the craft of songwriting; songs she’s co-written were recorded by multiple artists, including country blues crooner
Devin Cooper (Nothin’ On You, April 2018) and alt-pop singer Celia Palli, who is also a backing vocalist for Nellie Furtado (Paralyzed,
January 2019). She cares deeply about her community, and has volunteered at the Calgary Drop-In and Rehab Centre on multiple
songwriting and performance projects over the past five years, including planning and executing two coat drives for the shelter. 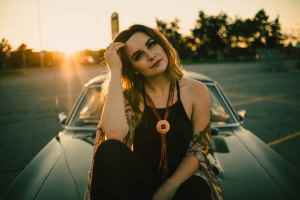