Country music artist Julia Vos is a small town girl with big ambitions. Now living part time in Edmonton and Toronto, she is entertaining and writing to take on Canada's country music industry by storm. Julia's music develops from a passion for sharing and raw personal experience. She was a Boots & Hearts Emerging Artist Showcase finalist for 2018, and was named Nashville North Star 2016 winner at the Calgary Stampede. Soon after she released her single ‘Whispers’ and has been featured on country radio stations Canada-wide. This led to her performing at the 2016 CCMA's in London for the Royalty Records showcase, and other opportunities. She has previously performed at the CFR half time show, Calgary Stampede events, and has opened for artists such as Gord Bamford, George Canyon, Adam Gregory, Beverly Mahood, and many more. Her early beginnings all started and are thanks to her parents and siblings playing together as a family band in the small town of Mulhurst Bay, AB. This gave her a great appreciation for classic country music and love for performing. Julia continues to work hard and cannot wait to share more music world wide. You can find her single "Whispers" on iTunes, Apple Music, Spotify, and all music streaming services. 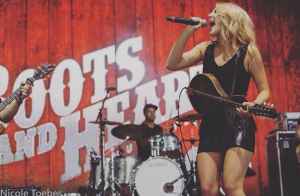