Although born in Victoria BC, Shaela Miller has spent the majority of her life in the windy southern Alberta city of Lethbridge and has been honing her skill as a songwriter for over ten years. Her affinity for the classic country greats of the yesteryear gives her an unparalleled disposition as an original ambassador of a new wave of country music. When asked to describe her music she replies simply: "Honky Tonk". But that’s certainly not all it is. Tear in your beer ballads, dance hall shuffles and dark alt-country noir craft work are all part of the package. With a voice that will send shivers up your spine and a penchant for turning a phrase that will make you relish in its simple eloquence, Shaela’s musical force is unabated and unrivaled.

Recently Shaela Miller won a 10k grant through Telus' storyhive video grant program. The music video made for her song, Colour My Love, was placed in the Edmonton film festival, Indie Memphis Film Festival and is up for an award at the Muskogee OK film festival. Other recent career highlights include a song placement on HBO’s “True Blood,” a songwriting/production session in Los Angeles with Tim Feehan (Park Drive Productions), winning the South Country Fair songwriting competition and continuing to perform steadily while raising two children. 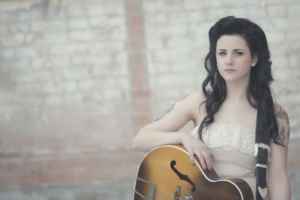 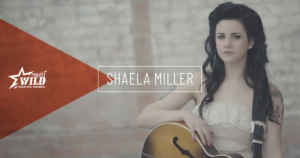 1. What brought you to country/roots music?
Like most kids, I grew up listening to what my parents listened to. Some of their favourite artists/groups were Roy Orbison, Dolly Parton, Patsy Cline and The Everly Brothers. I loved classic country music as a child but as I got older I got heavy into punk, rock n roll, indie rock and industrial music. I really didn't ever see myself getting into country music again in my life. As a teenager you could often find me in the mall hanging out HMV, picking out CD's from the 3 for $10.00 bin. The first and only country album I ever bought myself out of one of those bins was "the Patsy Cline Story". I became obsessed, and soon after, wrote my first country song called, "Country Love Song". Little did I know that was the beginning of writing many country love songs and the start of an endless love affair and exploration of traditional country/roots music.
2. When did you write your first song - as an artist or with a band?
When I was 14 I bought my first instrument which was a bass guitar. I jammed with friends for about a year on bass before I got serious about learning guitar. I practiced a lot and learned many covers to help get myself used to singing and playing guitar simultaneously. The first song I ever sang and played the whole way through was "I wish you were here" by Pink Floyd. It wasn't long after that I wrote my first song. I was performing all original material at open mics by the time I was 16.
3. If you could go on tour opening to any performing artist right now, who would it be?
Dwight Yoakam. Maybe because there was talk of it happening not so long ago! But really because I love his songwriting, which combined with his high energy performance is a captivating show. I've seen him live 4 times in various venues in Canada and the USA. Dwight is one of the few mainstream artists still playing traditional rooted country music with fun rock n roll elements while continuing to release new albums. I think I'd complement Dwight nicely, maybe even a duet or two?
4. What is the best trend in country/roots music right now?
The emergence of the Ameripolitan music scene - recognizing subgenres like honky tonk, outlaw, rockabilly and western swing - is a cool, growing movement that is keeping the tradition of country music alive, and distinguishes traditional country music from pop country. This scene has helped develop the careers of young female artists like Whitney Rose, Nikki Lane and Margo Price, who respect the roots of the genre while carving their own musical path. My music is very much steeped in tradition, so it's nice to see a distinction between this style of country music, and newer forms of country music, even if it's just to help people navigate what "country music" is in today's musical landscape.
5. What part of Project WILD are you most looking forward to?
I'm most looking forward to the boot camp in August. Receiving feedback from industry professionals on things like performance, showmanship and songwriting will be beneficial to me. I'm also hoping to better learn about music business matters, especially in the DIY climate that artists live in now. Being able to collaborate and discuss music, both from an artistic and business viewpoint, with new friends in a beautiful environment will be a once in a lifetime experience.